Thousands of serious bowhunters have discovered the effectiveness of the FUSE Carbon Blade SideKick. The FUSE Carbon Blade SideKick is a one-of-a-kind stabiliser and offers total weight balance flexibility to offset the mass of loaded arrow quivers and sights. As the quiver side of the bow becomes weighted down, the rock solid SideKick counter balances the bow, promoting accuracy while ultimately silencing the bow. The SideKick offers the total package...FUSE noise-demolishing technology, optimum weight balance and good looks. It features over 31 linear inches of noise and vibration reduction Shock Rods made from Limbsaver Navcom, an elastomer material which effectively dissipates vibration and noise, as well as a custom designed Doinker module, which eliminates low frequency vibration. If you are a serious bowhunter looking to tighten your groups and silence your bow, the all new FUSE Carbon Blade SideKick is for you.

Through intense research and testing, FUSE have developed Shock Rod technology. The Shock Rods are held in a mid point cantilevered position, allowing both ends to move freely in any direction. This enables the Shock Rods to destroy excess vibration and noise when a bow is shot.

Tests have demonstrated that bows equipped with FUSE accessories dampen noise 32% faster than traditional accessories. When you are bowhunting and every decibel counts, the difference between a trophy and returning empty-handed is often the sound, or lack of from your bow and accessories. That's why every FUSE accessory made incorporates Shock Rod technology.

FUSE Carbon Blade stabilisers are arguably the most effective and sought-after stabilisers on the market.

FUSE has optimised weight distribution of the SideKick and given it great looks. It's no wonder Carbon Blade Stabilisers have become a favourite among bowhunters everywhere.

FUSE Carbon Blade SideKick Stabiliser is available in a 6.5 inch model weighing 204 grams or 7.2 oz and in RealTree Xtra only.

A serious piece of bowhunting equipment for serious bowhunters.

You certainly set the bar high when you choose a FUSE Carbon Blade Sidekick Offset Stabiliser. 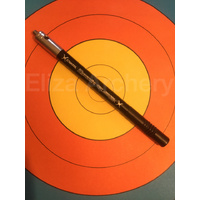